Continuing to analyze the conductor’s volume controlling gestures using the ConDiS conducting digital system. Now looking at 3rd. movement of Kuuki no Sukima. The first instance of volume value controlling happens around measure 29. As can be seen in this example from the score there are no written instructions, therefore, this is totally the conductor’s decision to control the electronic sound. 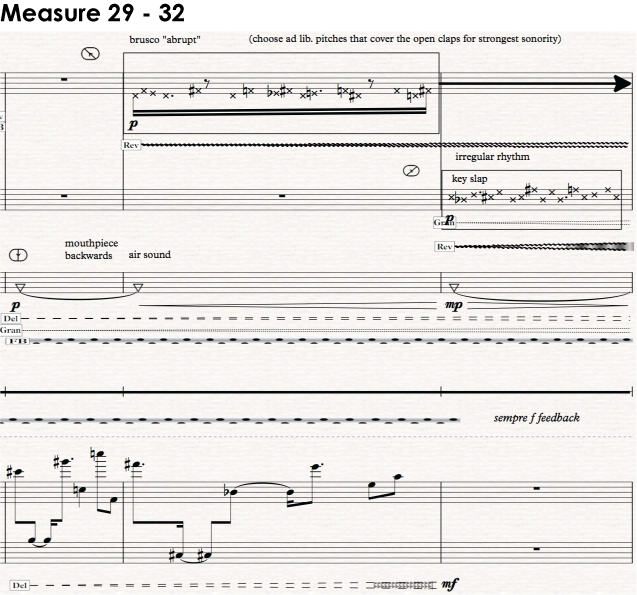 From the video clip below the conductor adds electronics at the end of the piano phrase or where the horn makes increasing air sound. The conductor is here consciously conducting the electronics and the acoustics the same way as she would be conducting transformation of one instrumental sound to another. It is important that the conductor has now become so familiar with the ConDiS system that she is now using that tool as she does when conducting the performers.

The following example shows measure 41-44 although the video clip starts about a measure earlier and ends a measure later. The main reason being a page turn that was not easy to copy an paste into such a small frame. In the missing measure before the conductor has to press the 3rd button to stop the DAW and then in measure 41 press the 4th button to have the DAW to jump (if it were off) and synchronize with the score at the beginning of that measure.  At the same time, the conductor decides to activate the volume value control which is not a bad idea but let’s take a look at how it did go. 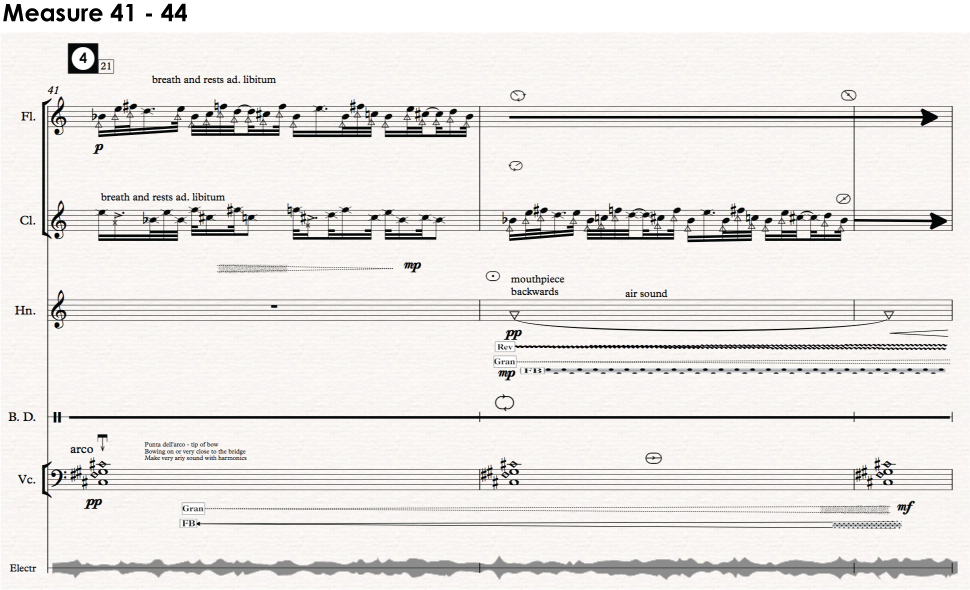 The following video example shows the conductor making a slight mistake but corrects it on the fly so to speak. There she has to stop the DAW and jump to next marker (buttons 3 and 4), she decides to close her hand for volume control but realizes that it was a bit too early, corrects it, does the button 3 and 4 and then she activates the volume control. Important to notice the flow of the correction how “naturally” she opens her hand again, presses the buttons and then activates the volume control.

The following example showing measures 54-63 is a very good example of the use of the ConDiS system, as the conductor needs both to stop the DAW and synchronize and then set a new tempo (metronome 92). Immediately she then activates a volume value control to reduce electronic sounds, although not written in the score.

The accompanying video with the same measures as above shows clearly how the conductor reduces the volume value of the electronics, probably because she has found the echo effects following the Pizzicato (plucked strings) to be too strong. Soon, she then decides to increase the strength so that the echo comes in. This is still a very good example of how the conductor himself determines the balance between the sound and electronics. It was my intention to keep the echo effect strong at the beginning of this pizzicato section, but I have to confess that the conductor’s interpretation is very good and gives the music a lot more life. There again comes to the conductor’s role in the music movement. Even if generally accepted that the conductor’s job is to put themselves into the mind of the composer and interpret music from it, then it is inevitable that the conductor sets his mark on the performance. The fact that the conductor puts his character in the composition is for me, as a composer, very important. That way the music comes to life, from being black dots on the manuscript paper to a sea of sounds, tones, and chords.

The following example from measure 82-87 again shows the conductor decides to activate the volume value control and add a bit more electronics to the performance. This section is very soft very subtle and therefore since all the electronic sounds are directly connected to the sounds of the instruments, so are the electronics. Still, we can hear that there is a very subtle change of tone color as the conductor raises her arm. A very beautiful movement in the piece and for me shows clearly how the ConDiS system can be used to make little nuances that are so important for my music. 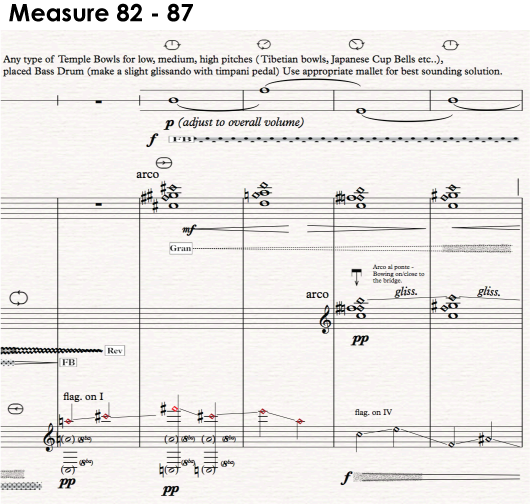 The following video shows the performance of the above score. Notice how the conductor decides to add more electronics to the mix and how ads a slight color change to the harmonic spectrum.