In my last blog, I went through analyses of the conductor’s volume value controlling gestures. Now, let’s take a closer look at the second movement where there is more complexity in musical action and therefore less time for the conductor to adjusting the electronic volume.

After a fermata and a jump forward (button 3 and 4) there is a left-hand pizzicato in the Double Bass a high note in the Violin and then a short Flute motive. Shown with red arrows in the illustration below.

Although, I personally would have liked to have a bit more volume on the Double Bass electronics I must confess that the conductor does a quite interesting job by not increasing the volume until the last sustained note of the flute. Let’s take a look at the performance.

Listen how the sustained note of the Flute gets an extra space when the conductor decides to add more volume value to that note. Keep in mind that this is not written in the score, here it is a musical judgment of the conductor to do so. This is very much to my liking and proofs for me the artistic value of the ConDiS system. It comes natural, it ads natural feeling to the flow, it is spontaneous and therefore an extension of the interaction between the acoustic and the electronic sounds. This could never happen except with the ConDiS system, which gives the conductor the ability to shape the music through her musical experience and knowledge. It gives the conductor a tool to express her musicality to the whole performance, not only the instrumental part.

The next example is from measures 16 – 21 where the left-hand pizzicato motive from measure 11 is repeated. Again nothing is written in the score for the conductor to adjust the electronic volume value. It is, therefore, her musical judgment to add more electronics to the pizzicato. By doing so, the conductor brings out slightly variated repetition causing a very interesting effect, making the repetition much more effective.

Conductor ads electronic volume to the pizzicato motive of the Double Bass.

In example 3 there is a written instruction to the conductor to raise the volume. It should probably be to increase the volume by raising her arm. there is also an OK sign there that is probably a leftover from earlier versions when the conductor could also activate panning and effect control with thumb up sign. Control that I decided to leave out firstly since it was not part of the traditional conducting job and secondly since it was too much task for the conductor. I decided to leave the OK sign there for the conductor to make absolutely sure that the volume value control would be activated and also just to find out her reaction. 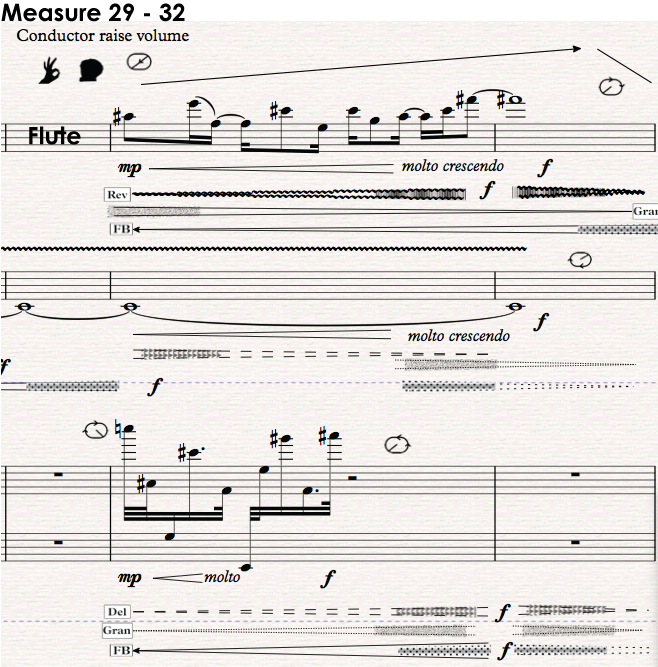