What I want to focus on in this blog is the conductor’s use of her arm to control the overall volume of the electronics. As I did show in earlier blogs she does at the beginning adjust the overall volume but does she adjust it again?

The answer is Yes she does and by looking at performance in Copenhagen we find out that she does it seven times during the 107 measures of the first movement. I choose to use the Copenhagen concert since it was the last concert of the four during the Nordic Tour. That means the conductor had got more acquainted and experienced with ConDiS and was using the glove’s possibilities in a more relaxed, freer and natural way than at the beginning.

Four of these seven volume controls are written in the score. Why? They are written in the score as part of my research to find out how the conductor responds if volume control values are written in the score. It should be stated that I did not ask the conductor specifically to make changes there but told her that these could be interesting spots in the piece to adjust the balance of electronics and live instruments. I wrote them there yes as said before because these were good places to adjust or even play a little with volume value changes. Perhaps I wrote them there so the use of the ConDiS could be a bit more noticeable for the audience. Perhaps I was being a little bit show-offy. Let’s look at these places in the first movement and see and hear how they work.

The first volume control is written in the score at measure 3 and 4, see illustration below. It is well illustrated in my former blogs and does therefore not need more explanation.

Here is a video clip from the same spot of measure

The Bass Clarinet comes in with a combination of irregular key slap and trill and soon after the Horn plays a note that has a crescendo from p (soft) to f (loud). At the same time, the conductor decides to give the Horn a bit more electronic support as can be heard in the below video clip.

The electronic effect can easily be heard as the conductor raises her hand and therefore it is clear that she is affecting the overall value of the electronic sound. Since the conductor opens her hand in the topmost position of the arm the electronic value stays at a high value until she does the next adjustment which occurs only a measure or two later (approx. measure 24) as can be seen in the next example. 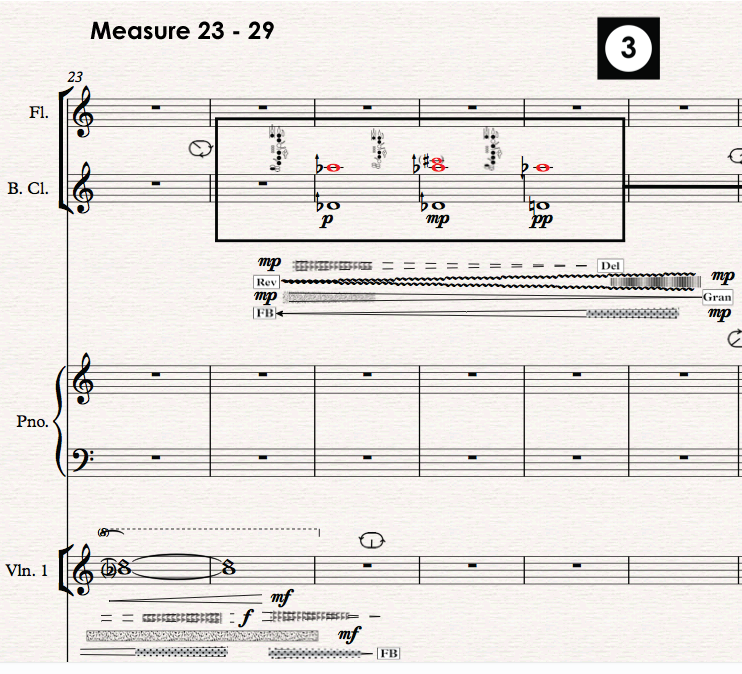 Video of the same measures.

It is clear that the conductor decides to lower the electronic sound value when she hears that the strings are getting a little bit strong and then after the clarinet comes in decides to give it a bit more electronic sound value by raising her arm up to almost top position but then decides to lower it a little bit and deactivates the volume control around 75% of the total value or with the arm just above the middle level. It has to be pointed out that the position of the arm and volume value can vary since it is all based on the relative position meaning that the arm position value is based on the last arm position value. This means that if the conductor deactivated with 75% volume value with her arm about 2/3 up from the lowest position she will keep that value as a starting point next time she activates the volume value control no matter in what position her arm is at that moment. This had to be done since otherwise there would be an audible jump in the volume when she activates the volume value control since the arm is most likely not going to be in the same position as the last time she deactivated the control. There is more written about this and other technical issues in the technological chapter of this essay.

Similar things happen in the next example from measure 63 – 68.